The next couple of weeks will be filled with one, two or three night stays as we make our way eastward.  Stops in a few states we have never stayed in before so we can add them to our checklist.  We decided not to venture to the Rocky Mountain National Park area for several reasons.  One was we have grown a little weary traveling the higher elevations and at this point prefer a less stressful ride eastward while enjoying the changes in scenery.

In order to get around the Rockies we veered a little northward to Laramie, Wyoming for a three night stay.  Our stops recently have consisted of doing maintenance on the RV and truck, stocking up on groceries, cooking and just getting a little better organized, kind of out of vacation mode!  One afternoon we stopped by Curt Gowdy State Park at the foothills of the Laramie Mountains.  A pretty park with a great visitor center. There are three reservoirs located within the park, Granite, Crystal, and North Crow.  The park has camping with views of the reservoirs, really nice amenities, and tons of hiking and biking trails.  Curt Gowdy was born in Green River, Wyoming and grew up in Cheyenne, Wyoming.  He was a sportscaster and well known as the “voice” of the Boston Red Sox.  He covered many national sporting events primarily for NBC and ABC Sports in the 1960’s and 1970’s, from the World Series, Olympics, Super Bowls to the long running outdoor show “The American Sportsmen.” 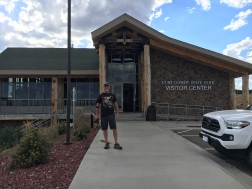 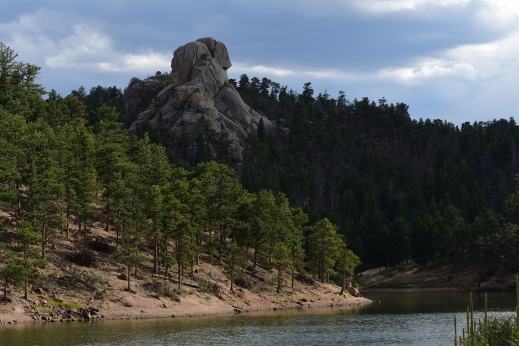 Next stop Omaha, Nebraska, with a visit to Boys Town.  Father Edward Flanagan was discouraged doing his work with homeless men in Omaha NE.  He decided that he could do more to prevent the cycle if he started helping the boys he saw living on the street.  In 1917 he opened his first Home for Boys in a rented boardinghouse in downtown Omaha.

In 1921 he purchased Overlook Farm and moved his Boy’s Home, later renamed Boys Town.  It is home to the National Headquarters, family-style residential homes, High School, Vocational Center/Print Shop and much more.

Many of the buildings are open to the public including the Visitor Center, Hall of History and Fr. Flanagan Historic House. 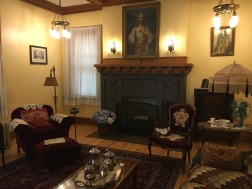 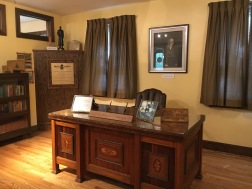 It’s one of the largest not for profit child and family organizations in the country.  It provides services such as Boys Town In-Home Family Services where consultants work with the parents and their children in their home in order to keep the family together.  It’s a beautiful campus, well worth the visit and support!

Well our next stop was suppose to be Kentucky!  But we got a curve ball that sent us northward to MORryde in Elkhart, Indiana.  Fortunately not too far into our travel day (which was unusual to stop that early) a quick check on the wheel bearings with an infrared temperature gun revealed the same wheel bearing that gave us problems in California was reading hotter than all the others.  Then after jacking that side up we discovered the wheel hub was a little bit wobbly, not a good sign!  Bruce tightened the nut on the spindle to the 50 ft.lb. spec and that eliminated the wobble, but by spinning the tire it still was better to have the bearings checked and replaced. The day was spent sitting at the Lizton Rest Area in Indiana waiting the arrival of a mobile tech company to arrive after getting the parts we needed to replace the wheel bearing and by the way they did a great job at getting us back on the road! Brian at MORryde was great at fitting us into their schedule and making sure we had a place to hookup electric and park after arriving at midnight.  Our suspicions were confirmed that the spindle on the wheel hub needed to be replaced.  We also had Sergio (our favorite mechanic) check out why the tire on the other side had a terrible wear pattern (tires were new last year).  Our guess was it was out of alignment due to the crappy roads we have traveled, but not so, the rubber spring was tore that is attached to the wheel hub, causing the wheel hub to be slightly tilted.  Needless to say it was another good decision to divert northward to MORryde for repairs. 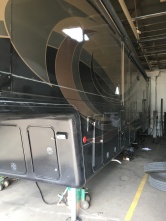 Back spindle replacement, grease and check all wheel bearing

Our two days were still very enjoyable with visits to some our favorite places and a great car show in Middlebury, Indiana. 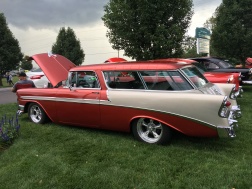 Again, we are thankful and blessed that the wheel bearing issue was discovered early with no damage to the RV and everyone on the road was kept safe.  Safe travels everyone and now onto Kentucky!